You have to remember that in training German shepherd puppies, there breed always plays a big role. All dogs have individual characteristics and traits but their breed determines a lot about them. German shepherds are intelligent and highly affectionate but because of their intelligence, it’s important to make them feel like they’re part of your activities. They want to feel that you treat them as intelligent and superior creatures. Show love and affection but you have to be firm with your commands, as they also have an independent character to them, thanks once again to their intelligence. German shepherds form strong bonds with their master but forming bonds with them takes time. You have to be attentive and loving towards your little German shepherd.

Also remember that you have to be sensitive with time when training German shepherd puppies. Puppies are like human children. They have a short attention span. It’s best to keep the first few training sessions to 5-10 minutes. The last thing you want to avoid is a burnout and resentment on the side of your puppy. It’s important to establish to them that they will reap the benefits of their hard work when they do what you tell them. Keep your commands short and simple. Be firm but gentle with your voice. Enunciate words well to avoid confusion. Start with 2 to 3 tricks and build the dogs repertoire from there. It’s important to train your German shepherd puppy daily so that the tricks will register fast in its head.

Whenever the German shepherd fails to do your command or disobeys you, say no in a firm voice. However, avoid aggression. This will just make your German shepherd stubborn. Train in an environment that’s devoid of objects or people that can potentially distract the puppy. As much as possible, observe uniformity in time and location when you train for the first few times. Only you and the members of the family should be able to train the dog so that it knows who the masters are. Patience is essential in training German shepherd puppies. 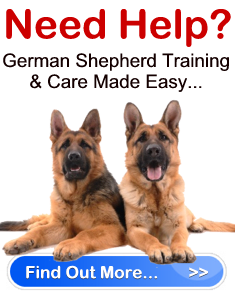